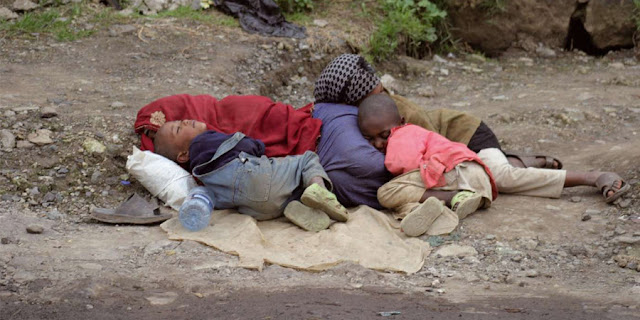 Ethiopian family living on the streets of Addis Ababa

Ethiopia: Whose development is it anyway?

Our defeat was always implicit in the victory of others; our wealth has always generated our poverty by nourishing the prosperity of others—the empires and their native overseers. In the colonial and neo-colonial alchemy, gold changes into scrap metal and food into poison.
— Eduardo Galeano, Open Veins of Latin America


International agencies, such as the United Nations Development Program (UNDP) and others, are finally beginning tolanguishing under severe poverty Ethiopia see through the glossy propaganda of TPLF’s “development” scheme. As such, they are offering a bird’s eye view of the reality and the true nature of the so-called “development” in terms of who is benefiting and who is being left behind. The poverty and literacy figure the UNDP outlined in its annual report is astonishing in scope and scale. A staggering 25 million Ethiopians are languishing in the dungeons of poverty, while 20 million can’t read or write.1 At the same time, the fat-cats of the ethno-elite and their inner circles continue to accumulate unparalleled economic wealth and concentration of political power.

What is startling about this particular report is that it doesn’t simply talk about the usual and normalized poverty description, but it defines the economic and social reality of 25 million people in terms what it calls ‘severe poverty.’ The report further elucidates the situation in the following terms: “Poverty severity is increasing indicating that there is a need to focus on reaching the poorest of the poor more effectively.”2 These 25 million people are living below the national poverty line. What this means is that under the exclusive rule of TPLF, at least half of Ethiopians are languishing in poverty or severe poverty.

The question for any development analyst or to the general public is: how is this possible in a country in which the ruling elite has been pontificating the mantra of ‘double digit growth’ for the last 10+ years? The answer could be found in the UNDP report specifically discussing ‘inclusive growth.’ The report says “inclusive growth and development is occurring only slowly across the entire country and among certain socio-economic groups.” In other words, the growth is tailor made with specific target groups and geographic areas the ruling elite identified as a priority and focus area.

The cosmetic and exclusive development has had visible flaws in its form and application. First, the technological, scientific, and labor dynamics of the government policy lacks indigenousness. Foreign workers, such as Chinese nationals, dominate a few roads and bridges being constructed. Any sustainable development history tells us that a country must be able to harness the capacity and potentials of its citizens while exchanging knowledge and expertise with others, in the process, building local capacity and a knowledge pool. A few glittery roads, overpasses, railway lines, and unattractive shiny buildings primarily concentrated in the capital city and few select areas have been held up by the regime as development indicators while rural poverty and lack of infrastructure is still widely visible.

The social and economic mobility is reserved only to those select few and their inner circle. The ethno-elite have created their own ‘Rich-istan’ where they live in a looted luxury, where they conspire on how to keep the masses quiet, afraid, brutalized, and marginalized. Like their predecessors, their gated villas are designed far away from the poor and their misery. Their links to the poor and marginalized are through their heavily armed police, and constant watches of the security and intelligence apparatus. The ethno-elite are gorging on unchecked wealth; they are the policy makers, the businessmen and women, regulators, judges and juries. Their children and members of extended family are sent overseas to study. Their family members are flown outside the country for medical treatment or to give birth, so their children can have foreign citizenship while vast numbers of Ethiopians don’t have access to basic medical service or clean water.

They control every facet of life in the country. When wealth is accumulated in the hands a few the obvious result is the poor and the marginalized get poorer and desperate, and the difference is between those who have too much and those who have nothing. This is the reality of Ethiopia under TPLF. This organized inequality and exclusion is not accidental; it is, in fact, by design. The political, economic, and social engineering of TPLF is intentionally designed to benefit the select group at the expense of the vast majority of the population. It is important to stress that the polarization agenda is the agenda of a select few elite members of the TPLF to prolong their hold on power, economic and political. It is also important to know that the economic, political, and social injustice of TPLF does not discriminate based on ethnicity. It targets any individual, group, or organization that challenges its hold on all forms of power.

The UNDP in its report stressed the importance of inclusive development the problem is how could one expect inclusive development in an exclusive political and economic system. The entire political and economic institutions and infrastructure are designed, controlled, and managed by the TPLF inner circle and their select cronies. As a result, the current political, economic, and social order is becoming increasingly unsustainable. The political, economic, and social frustration of the population is becoming more and more prevalent in the day-to-day lives of the average citizens. This exclusive, polarizing, and unjust order is pushing the country in to dangerous territory. If not addressed carefully and quickly, the very survival of the country is at stake. Those who care and concerned about the future of the country must look beyond the appearance of things, and begin addressing the realities. Diffusing this kind of polarized landscape and inequality is the responsibility of all Ethiopians.