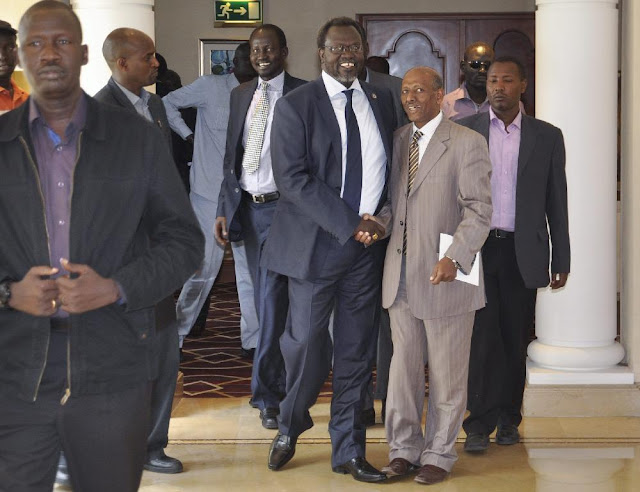 Prior 1991, It is public knowledge that the South Sudanese Peoples Liberation Army (SPLA) was fully supported by the previous military regime of Ethiopia called the Derg. The Derg supported SPLA as a Tit for Tat to Sudan supporting the Tigrai Liberation Army (TPLF) and Eritrean Liberation Front (EPLF). As a result, the SPLA and its supporting institutions were based in the Ethiopian Gambella region and surrounding areas. When the TPLF came to power, in May 1991, the first thing it did was to order the SPLA to leave its camps in Gambella and surrounding areas within 24 hours. Remember we are talking about a camp that held close to a million South Sudanese war refugees. When the refugees were not able to cross the overflowing rivers and were forced to wait until they recede, the TPLF sent its murderous and blood thirsty soldiers and killed the women and children using heavy artillery. In their quest to flee from TPLF soldiers and heavy artillery the rest were taken by the river and most of them eaten by crocodiles. In the absence of any support systems, the few that were able to cross into South Sudan territory lived in the jungle like animals and perished of thirst and hunger. If you need more information on this incident, you need to read the story of the lost boys of South Sudan. Those boys were part of the refugees who crossed from Gambella into South Sudanese territory and later picked up by a western NGO for resettlement in The United states.

After the liberation of South Sudan, mainly through the help of Uganda and Eritrea, the shameful minority regime in Ethiopia supported by the United States and its western allies were able to infiltrate the government of South Sudan. Under the disguise of security cooperation and capacity building TPLF generals, Like Tsadkan Gebretnasae, who ordered the killing of South Sudanese women and children in Gambella became chief advisers to the South Sudanese government. It is only a fool who thinks these TPLF generals were in Juba to help the government of South Sudan. Their job was to identify the Nur and Dinka fault line and create a discord among the peoples of South Sudan. Once the civil war started the mission was accomplished and the goal gravitated into replacing the current government of South Sudan by Ethiopian allies. That agenda, at least in the short term, failed mainly due to the full support of Uganda to the Salva kirr government and the latter’s insistence to remain in power, regardless of the continuous threats of the united states and its allies. Once Seyoum Mesfin and its handlers knew that it was not possible to change the Salva Kirr government within a short period of time they planned for the long term. They agreed to put Machar as vice president and call for election later. Hence the problems that we are seeing in South Sudan right now, including the constant fighting in Juba, is an extension of the Ethiopian minority regime agenda to prepare Machar as the next president of South Sudan. If you do not know this yet Machar is armed, financed and hosted by the minority regime in Ethiopia.